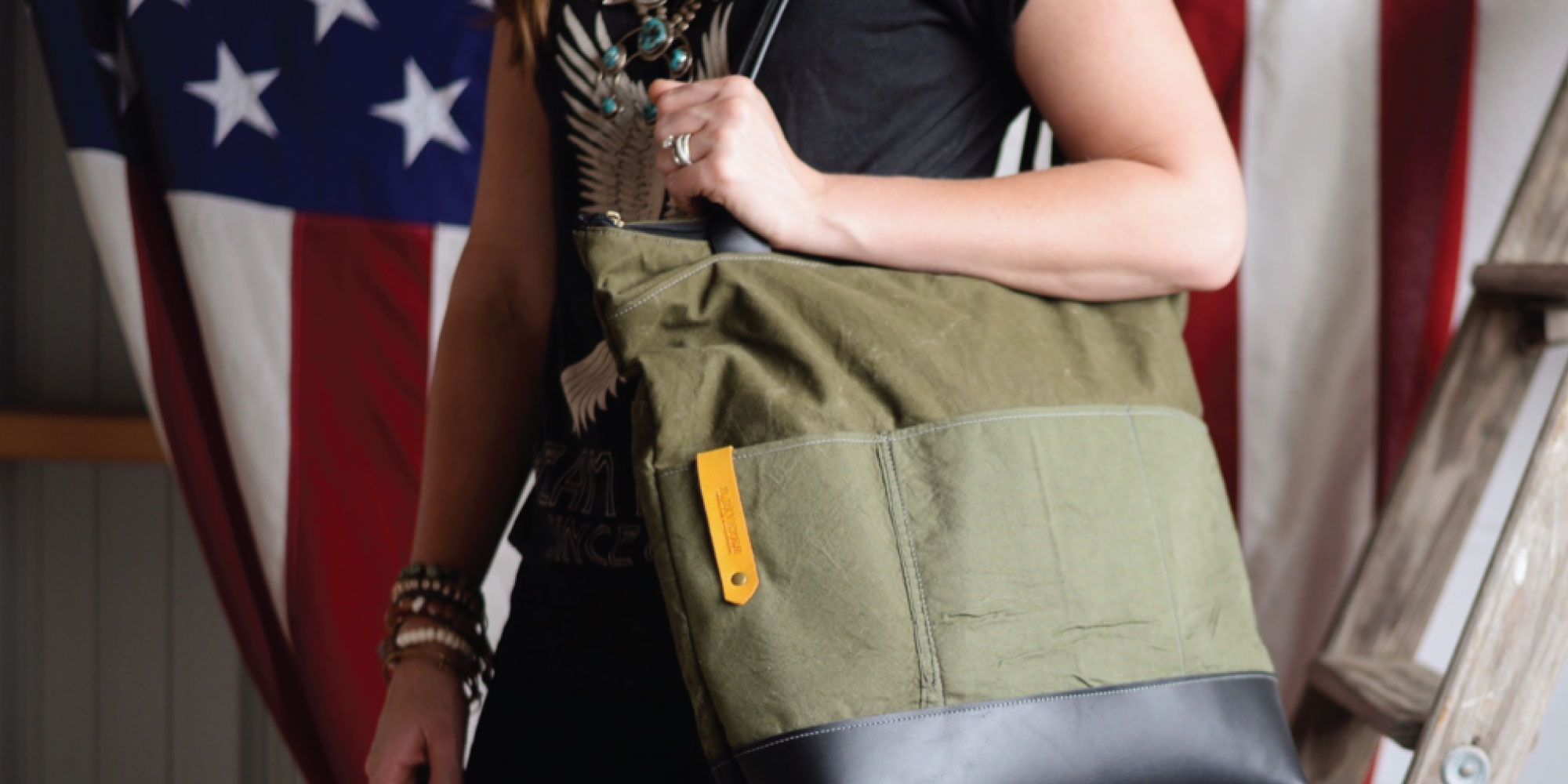 Over the last three years, R. Riveter — the popular maker of handmade leather handbags crafted by military spouses stationed across the U.S. — has increased sales 1,273%.

“One of the driving factors to upgrade to Shopify Plus was the dedicated account representative that is part of the Shopify Plus package. Having another individual as an extension of our team that is an expert on our sales platform is a direct investment in that sales channel.

We’ve been with Shopify from day one and it handled the surge in traffic from our Shark Tank appearance without any problem at all.

It’s a sacrifice few ever see.

Not the obvious stress of deployments or juggling children and erratic schedules without the help of a spouse. This sacrifice is one that slowly but surely erodes the confidence and self-esteem of military wives throughout the nation …

“I got turned down for another job,” Lisa Bradley recalls saying repeatedly to fellow military spouse Cameron Cruse when their husbands were stationed in Georgia. “That’s how we became friends — we really struggled to find work despite being overqualified.”

Both have Masters degrees. Each is creative and full of business smarts and grit. Yet employer after employer told Bradley and Cruse they lacked the experience necessary for the positions for which they had applied.

Why? Because military spouses move on average every 2.9 years. As a result, employment gaps open up and plant seeds of skepticism in would-be employers. In fact, unemployment among military spouses is 42% despite the fact that 85% want or need to work.

But, what if that sacrifice no longer had to be made?

That’s the question Bradley and Cruse asked themselves: might there be a way to build a business that provides military spouses with portable employment opportunities regardless of where they live or how often they move?

The Mission, the Fire, and the Icon

The decision was made the week of Veterans Day 2011, in the dead of winter. “It was time to stop being part of the problem,” Bradley explains, “and create a solution.”

Bradley and Cruse kick things off humbly at first, their new company headquarters in the attic atop Cruse’s home. “We didn’t want a lot of overhead,” says Bradley. “We didn’t have a lot of resources and Cameron had a one-year-old at the time so that’s how we started.”

Each charged two thousand dollars to their credit cards to purchase a commercial sewing machine and a small supply of leather and canvas. The idea was to was to make handbags, earn some money, and ultimately offer military spouses across the country an opportunity to join them in earning flexible income no matter where they lived. That vision, however, was almost immediately put to the test …

To stay warm in the attic, Bradley and Cruse bundled up in winter clothing and sewed handbags until the wee hours of the morning. One night, while working late, Bradley got too close to the kerosene heater.

“My pants caught on fire,” she says with a laugh. “Luckily they were made out of a plastic-like material so they just melted before the fire could spread.”

Those were the first few days of what would become R. Riveter. The name pays homage to Rosie the Riveter, a World War II icon that symbolizes the contribution women made to the workforce that helped win the war. For the first six months, R. Riveter was a two-woman show. “We couldn’t keep up with demand,” remembers Bradley, “no matter how much coffee we drank.”

That’s when R. Riveter created the remote manufacturing network they’d founded their business to bring to life. Other military spouses, known as Riveters, across the country crafted handbag pieces. Pieces were sent to a fabrication shop in North Carolina. There they were assembled and shipped.

In 2015 — a year after a successful Kickstarter campaign — R. Riveter opened a large retail store in North Carolina where Cruse had moved. And demand exploded.

“Up until then,” Bradley recalls, “each bag was custom-made, and customers could choose their color, liner, and style. That got us the cash flow we needed but to scale we knew we needed to start selling from pre-made inventory.”

The break R. Riveter needed was in sight. But to get there, they’d have to do two things both courageous and terrifying on the surface.

First on the list: fire one of the co-founders …

Depending on the design, as many as twelve Riveters are involved in making each of the company’s handbags. Each Riveter stamps their personal Riveter number on the piece they make which allows customers to look inside their bags and see evidence of all the Riveters responsible.

But there’s one Riveter whose number — RR002 or RR001 (depending on which founder you ask) — you’ll never see stamped inside one of the company’s handbags. As Bradley puts it:

I actually got fired from sewing pretty early on.

The realization that Bradley was less than a stellar seamstress came at an R. Riveter pop-up boutique when a customer who had already purchased a handbag made by Bradley showed up with a polite yet embarrassing complaint.

“I love this, but things keep falling out the pockets.” And that customer wasn’t the only one. Without knowing it, Bradley had sown her last shipment with the pockets upside down.

Thankfully, Cruse — a designer and expert seamstress — took over production, and Bradley gave her focus to what she does best: run the business.

And run it she has …

In 2016, R. Riveter appeared on Shark Tank where Bradley and Cruse made their pitch and wound up with three offers: “It was the most exhilarating and terrifying day of our business lives.” The ladies accepted Mark Cuban’s offer of $100,000, which Bradley says was made after Cuban noted that manufacturing in one spot is notoriously difficult and that he was impressed with the remote manufacturing network R. Riveter had created.

Following the show, R. Riveter increased its remote network of Riveters from fifteen to thirty to meet demand and further its mission. Additionally, the company upgraded to Shopify Plus, an ecommerce solution for high-volume merchants focused on growth.

As Bradley explains: “We’ve been with Shopify from day one and it handled the surge in traffic from our Shark Tank appearance without any problem at all.” In addition to Shopify Plus, R. Riveter’s technology stack includes the following tools that are contributing to accelerating revenue growth:

Avalara: an automated tax compliance solution that easily integrates with your business tools.

“With many remote employees located in different states, we take our nexus very seriously. Avalara has significantly reduced the administrative complexity of a remote working company.”

“We have been using Shopify Flow for things like inventory alerts and for high-risk orders. This really helps keep our marketing and sales teams out of the weeds, but still able to take timely action.”

Shopify Scripts: small pieces of code that allow you to create personalized experiences for your online store customers in their cart and at checkout

“Shopify Scripts — and, in particular, the Script Editor — gives us a lot more flexibility when a specific tweak needs to be done to our offerings. For instance, we offer expedited shipping on select products during the holidays.”

“One of the driving factors to upgrade to Shopify Plus was the dedicated account representative that is part of the Shopify Plus package. Having another individual as an extension of our team that is an expert on our sales platform is a direct investment in that sales channel."

We heavily rely on our online sales and utilizing Shopify Plus’ Partners to stay relevant is imperative in a fast-changing online world.

The Numbers That Matter

If you extend that time from to the last three years — as Inc. Magazine does for their annual Top 500 list — it’s even more impressive: 1,273%. In addition, the company has …

It’s a mission that started with handbags but is now morphing into new creations like storage boxes made of license plates that remind service members of the places they once and will again call home.

“What we’re really building is a huge network for success. The modern American woman feels like she has to do it all and the Riveter network is a place military spouses can go to get the support they need from people who understand.”

While Cruse and Bradley aren’t ready to show their cards, you can bet that any future moves will be based on the same mission that propelled R. Riveter from a frigid Georgia attic and onto a national stage where a billionaire investor was charmed.

“Whatever the future holds our focus will be helping military spouses. It has been a phenomenal experience and we’re just getting started.”

Written by Nick Winkler at Shopify.

Nick Winkler is a contributor to the Shopify Plus blog and founder of The Winkler Group, a strategic communications firm that provides content marketing services to the world's best-known brands, businesses, and marketers.

Get expert advice for your business delivered to your inbox

Monday mornings with Minion Made

Get in touch with us!

Fill out my online form.